Idle Delilah is a song performed by Azealia Banks. It serves as the first track on Azealia's debut album Broke With Expensive Taste.

"Idle Delilah is the daughter of a farmed white slave owner in the 1900's who was killed by her own father's slaves. I wrote a fable edition of Broke With Expensive Taste, like some real mother goose shit. Idle Delilah's father is a famed slave owner in the early 1900's (America). Delilah is his favorite child. Delilah's mother, Lillith, knew of the hatred her father had created for himself in the town by a pro-slavery activist. One day, the white man's slaves grow tired of his bad treatment and decide to kill his favorite daughter, Delilah, as payback. They covered her small body in black tar and a white cloth with two red bows. She was found dead in the forest by the town drunkards. So the dead Idle Delilah, the one i'm singing of in the song, is defined as a spirit of time. She represents procrastination. She lives behind doors and hides in garbage cans. Her favorite day is Wednesday and her favorite number is 3. She likes red hair barrettes and clear sodas. Playing Jacks, is the most direct and clear form of divination for Idle Delilah. Idle Delilah works best in the playground. to conjure her, visit a playground at 3am with a red candle and two red bows in hard. Leave 3¢. She was six years old when she was murdered."[1][2]

[Verse 1]
Idlest Delilah
Darling, do ya like beige in your coffee? Tea? A wild-?
Wild breeze on a day, a dawn
Oft' indeed a child, smiles at me cause I'm made of yarn
Dolly, me? Am I? I'll trade a dollar for ya dime, oh
Idlest Delilah
Trout and trees remind me of my
Darling 'D the Diver,'
Diver D was a satyr - a
Father figurine
I made him run away with his stale lung
Folly me am I? Oh, Idol-less Delilah
Darling Miss Delilah
While you're wasting your days alone
All your friends are hired, all your friendships are fading
Don't try to cheat the dial, don't look the other way
It could play out wrong
Are you suicidal?
Are you in denial?
Idlest Delilah
While you're 'wake hear my latest song
Glad to see you smile
Glad to see you so stable
What's all of these divided by the pile of peas on the nape of your..
Dolly me am I? I'll trade a dollar for your dime
I'll take you

[Outro]
(It’s that jam g, it’s just flavors-
Rhythm and dance beat, so what up?
Lit that damn green and it’s blazin-
Bitch, i’m stance, steez in the cut
Upton N-Y-C is famous, london fam
Please throw it up little bam-bi with the latest
Give her that stamp, g - put it up!)

The Quietus opined: "...Her crew of mostly unfamiliar producers are equally assured in their ambitions. Pearson Sound builds the opening 'Idle Delilah' with a series of reveals—a moody drum machine becomes a swinging Latin groove, which then makes way for a punchy, lyrical guitar lick a la Tom Verlaine."[3]

Pretty Much Amazing opined: "Album opener “Idle Delilah” quickly establishes the album’s musical modus operandi — throw everything at the graffitied wall and see what sticks. Banks unleashes bongo drums, monkey screams, and an ice cream truck jingle of a steel drum hook, all while alternating between maddeningly sing-song vocals and her characteristically furious and venomous flow."[4] 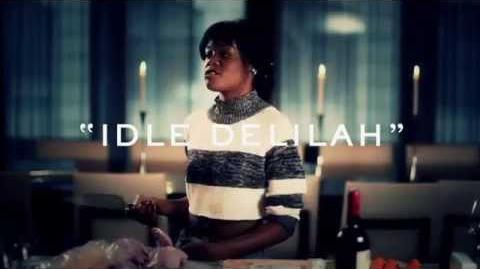